It’s the time of year where obligation drags us to parties we could easily have blown off in April. It’s not in my introverted nature to enjoy the Christmas party ritual, but I’m philosophical about the phenomenon. They indicate you or your loved one has a job worth cultivating by your presence, a relatively positive thing to force your hand.

So we go along like good eggs and hope for the best. If you’re a skilled introvert you can survive this extroverted predicament by planting yourself strategically in a dead-zone to make yourself inconspicuous. You tuck in behind a tall plant without appearing as though you’re hiding, situate yourself directly opposite the bar and food table, or stand on the peripheries of a group engaged in conversation, nodding your head pointlessly from time-to-time to sustain the ruse you’re an active participant. There, you’ll sip your wine hoping to avoid being enveloped by the dull, dreary blanket of small-talk and ponder the book you’re in the middle of. You’ll daydream about the passion you’re forgoing to be among a swath of virtual strangers who won’t be seen again until next year’s party.

Without warning Fred, whose wife works with your partner, recognizes you from last year’s Christmas party as he piles fruit cake, seven-layer dip, and chicken wings on his plate. He turns to head in your direction, his sweater blinking intermittently to light his path. This year, he’s pulled out all the stops to win the tacky sweater contest, and by golly he’s gonna break the ice with you.

Smited by God, yet again, for my failure to believe in her. A vengeful shrew she is, to say the least.

I’m not ashamed of my job, but it’s like any other white-collar gig. I’m paid for a cognitive skill I honed with higher education and spend most of my workday putting my shiny-trained mind to the tasks at hand. I’m pretty good at what I do, according to those who sign my paycheque. It’s all pretty un-spectacular and fraught with disillusionment for falling short of the ideal, like much else in adult life.

It’s slightly embarrassing that a place consuming so much of our time is so banal in the description, but that is usually the case. Among close friends, the mundane oppressiveness of working life is dignified with cynical, witty tirades about the pettiness of office politics; with creative embellishments of professional achievements to justify the continued effort. Friends will empathize with the seething emotion beneath the affectation; they’ll see through the bravado and cheek, and will be supportive and entertained without attaching judgment to betray confidences.

Among relative strangers, political imperatives dictate the safe path be maintained in discussing work, which sucks. If I can’t sarcastically mock the shortcomings of my workplace or vie for your sympathy in outlining the abjectness of my career plight I’d rather avoid the subject entirely. I’m not getting paid for this shit, after all, and I need to have some enjoyment in my personal time.

Since I’m fortunate to not be bogged down in an hourly-wage job, I have spare time to do things I like that are, dare I say, maybe a little sexy. I do yoga. I read books on all kinds of subjects and can sing arias in Italian, French, and German. I cry when I hear beautiful songs, like Beethoven’s ‘Pathetique’ or ‘Si, mi chiamano Mimi’ in La Boheme. I am a Buddhist and nearly have a black belt in Kung Fu. I lament my kids will soon be teenagers; I despised teenagers when I was one and worry the days of loving my children unconditionally will face serious challenges. I jot down fleeting, quaint musings about life in a blog. 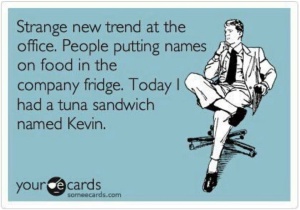 We should be talking about these things, not work. In the aggregate they say something far more interesting about me than my work could ever do. My work indicates to the world I have a job and an income. Maybe it says I’m ambitious and hard-working; that I know how to do stuff. Yawn.

Chances are there are similarly more interesting, unusual, or telling things about you than your job. The difference is in the details. That’s what would make this conversation interesting. Odds are, if you stop dithering about work we can weather this party without needing to get wasted and twerk on the tables in our thong underwear to feel as though it was all worthwhile.

Actually, I should qualify. If you came back from helping African countries fight the spread of Ebola, or spent last week snapping photos of earth from the International Space Station, I’d like to hear about that. If you build schools in Bolivia for the poor, or are working on a cure for cancer, I’d probably be interested in that too.

Having said all that, I need to be brutally honest. As much as I don’t want to talk about my job I really, really don’t give a shit about your job. I beg you not to talk about it unless it’s objectively amazing, which you know it isn’t. It sucks just like mine. If you had an amazing job I’d probably know about it and you wouldn’t be so intent on winning the “Christmas Sweater for Morons” contest, or whatever it’s called in your zany workplace.

I also don’t care if you make oodles of money being good at your job, or are high up in the pecking order where you work. The hierarchies that poison white-collar corporate environments are contemptible, but I understand why anyone would be proud to be a big-shot. That said, it doesn’t interest me. In fact, because I have a rebellious anti-authority bias, if one of the first things you tell me about yourself is that you’re a big-shot, I will probably passive aggressively cut-down whatever smug, mean-spirited, or inane thing you might say thereafter. Remember, I am not your friend, and I am trying to have fun here. To avoid all that, it’s best to steer clear of boring work talk and discuss opera, birding, salsa dancing or anything that will not risk glorifying what either of us believes is an exalted life.

For most adults, working life is kind of sad, pointless, and dull. It’s in the realm of necessity, like eating, drinking, sleeping, and defecating. If you’re socially adept, you don’t talk about your bowel movements or what you had for dinner last night, so I don’t see why you’re talking about your work, even if you really enjoy it. I had an enjoyable bowel movement last night, but I doubt you’re interested. What’s interesting and telling about a person are the things they do when liberated from necessity and are free to choose how they spend their time.

Nobody’s really dying to hear about another person’s job. The topic is raised as a feeble attempt to break the ice, make idle conversation, or pass the time. The desire to forge a bond is honourable in intention, but in the realm of small talk, a desperate appeal to banality to quell anxieties about our alleged separateness. It’s as deceptive and false as shopping and watching television in instilling the notion we’re engaged in a fulfilling use of our precious little time on this earth.

It is also sometimes a lame attempt to add a dash of ego primping to garnish a boring conversation. If we are resigned to the dullness of this experience we may as well stoke feelings of superiority. The question is asked, ‘what do you do?’ and when it’s our turn, we can describe in boring detail the facets of our more important job to others. At least our ego gets off this evening.

When a highly accomplished person asks a stranger point-blank ‘what do you do?’ it betrays an obvious lack of modesty. It is an ego-trip that may ultimately prove insensitive. To witness an unemployed person cobble together a face-saving response in a group of strangers is almost as horrifying as witnessing a woman whose precipitous weight-gain has elicited well-wishes on being pregnant with a child she is not expecting.

A person’s work situation may be temporary. They lost a job and were forced to take something quickly to keep ahead of the mortgage. The stranger’s wife may be a Doctor and the choice of who would be the stay-at-home parent was a no-brainer, but it still rouses feelings of discomfort because our society devalues child-rearing as a noble pursuit.

Maybe the stranger is slowly pursuing their passion on evenings and weekends. They work merely to cultivate their dream. Or, maybe their ambitions and energies are placed elsewhere because they don’t care about career pursuits. When so many marriages are destroyed, children neglected, and stress-related illnesses are suffered because of our culture’s work-obsession a focus on other things is a sensible life-choice.

All this is to say there are pitfalls with the question that need to be considered before it is put out there. The risk is a person you don’t know may find a question you’ve put to them extremely alienating. Until there is a real relationship, one not brokered with small-talk, it’s none of your business and shouldn’t be broached so directly.

The question also furthers the belief that career pursuits are the most definitive aspect of a human being. That is some self-serving logic for those who’ve forgone their youth to earn professional credentials and expend their time reaping the economic rewards by working. It is presumptuous to carry on as if the amassing of career achievements was a universally-shared priority. Nearly all North Americans are guilty of this conceit, which merely validates their choice to focus all their energies to the singular pursuit of wealth and status-acquisition to the detriment of all other aims in life. It sets us apart in the world as profoundly one-dimensional, uninteresting, and collectively ignorant human beings.

Modernity was forged to spare humanity the perils of so much time spent in toil. Those lucky to have been born in wealthy societies but choose to devote the vast majority of their time engaged in work seem to me either foolish or pathological. Either way, the time consumed by work, beyond a certain level, may actively invalidate a life given the luxury of other choices. Life is more important than work; a truth those who have been too career-focused realize only when the end of the precious life they squandered is imminent.

A buddhadharma teacher once said ‘do not speak unless it improves the silence.’ This holiday season, do so with a funny anecdote, or the sharing of a genuine passion. Speak as if your humanity was more vast than the changes in the weather, the ups-and-downs of the local sports team, or the trivial things you do to pay the bills.

Tell me something to improve the silence between us; something real about yourself. If work is all you have to talk about, you’ve got other, more self-enriching work to do in the new year. Get on with it. Get a life before it’s too late. At next year’s Christmas party, I’d love to hear all about it.

0 comments on “So, ‘What do you do’, to Improve This Conversation?”